the small print 3: The Search For Speck (Updated)

[Update. Due to a dramatic increase in my day job workload I am unable to devote the time required organizing this collection by the original October 1st deadline. I am hoping that my schedule will level off in the next couple of months, so I am tentatively extending the deadline until December. Thanks.]

Submissions are now open for the third “small print” anthology, a not-for-profit showcase of some of the finest writing in the overall Size community.

Print copies of the first edition were given away at the 2020 SizeCon. E-book versions were given to attendees at the two online SizeCon Minis that followed.

The second edition was made available to the public with a free e-book and a print edition available at cost. In addition to the 36 authors who submitted their works this edition included public domain pieces related to Size dating back centuries.

In both previous editions I was asked what the theme was. The closest thing to one I had was “get it done.” That's always going to be the overarching goal, but this time around we're going to make things a little more interesting and go with a proper theme.

Loosely defined that's two people at the same scale interacting with someone who isn't their size. That could be two tols with a tiny. Two tinies with a tol. A pair of expansionists with a non-expanded person. Etc.

I want this to be representative of the Size community as a whole. That isn't as easy as it sounds. It's been said that Size is siloed. You have the giantess lovers, the shrinking women fans, people who are into it for sexy reasons, and those who prefer things remain innocent. And those who favor scales from the microscopic to the galactic.

1.3000 words or less. This will have an e-book and a print edition. I want to fit as many stories (and authors) into this collection as possible. Excerpts of longer works are fine so long as they can stand alone. I want the reader to want to look you up after reading your story; not feel like they need to find the next chapter of your novel.

2.Characters must be 18 or older even if you're submitting a SFW story. There will be fetish content elsewhere in the book and it's better if we don't cross streams. You don't have to explicitly state character ages, but please avoid situations where underage is likely to be assumed. If your story involves an IRS auditor and a lion tamer my brain fills in a rough age range. If you're setting your story in a high school ... don't set your story in a high school.

3.Please don't use other people's intellectual property. I don't want to get sued. Pastiche/parody is acceptable. So I can't accept your Ant Man and The Wasp story, but I can consider your Bug Guy and Hornet homage. Characters in the public domain are fine. Gulliver is on the table.

4.In general avoid putting real world people in your submissions unless you have their permission. A meta story where Aborigen, Tina, Nyx, and I are having an adventure is fine as long as all of them agreed to be in it; a story about becoming the tiny slave of your celebrity crush or voring a politician you hate isn't.

5.Stories must be submitted with tags. That should include a general idea of the content (shrink, growth, inflation, etc) and content warnings for sex, violence, etc. The latter is very important. I want the readers to decide if they want to be exposed to the rated R/X end of the spectrum.

6.I reserve the right to reject any story.

7.Previously released stories are not only ok, they are encouraged. I want some of your best, not what you can crank out by a deadline.

On to the book itself.

I can't afford to pay you for your stories. Not what they're worth. And trying to do a royalty split with 30+ people is more work than I have time for. And there's the question of taxes.

The first time around I got around all that by not charging for the book. No profits, no profit split, no taxes. Easy. I printed up a 120 copies (paid out of my own pocket) and distributed them at the 2020 SizeCon. I found ways to get copies to contributing authors who were unable to attend the Con. E-copies of the book were given out as part of the Con package for the first two SizeCon Micros, but that's it. And a copy I gave my sister, but that's beside the point.

The deal I made with authors for the first anthology was that it would not be used to make a profit and that it would primarily be given out at SizeCon. They kept their end of the bargain; I kept mine.

The second time around I stuck to the former and dropped the latter. I made the e-book available for free on my e-junkies page. While it isn't possible to make print books without someone paying for them, they can be made without profit. Most print on demand companies will provide authors with copies at cost. It's makes selling our books at cons and Ebay practical.

Lulu lets me set the price at cost. What you pay is what Lulu charges to get the book made. Here's a cut and paste from my sales page to show you what I mean. 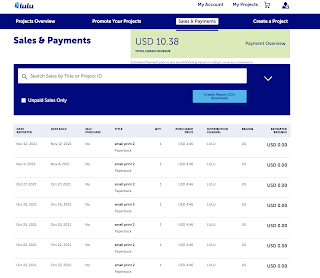 There is one other thing I'm doing differently this year. I'm asking for help. I know I'm not reaching every corner of the size community and there are many authors who I'm not reaching. Authors and genres of size I want to see represented in this book. I could use a hand finding them. I could use some ambassadors. If you'd like to help drop me a line here, on Twitter, or email me at mr.taedis@gmail.com.

Thank you. Thank you all.

Humanity has been obsessed with giants and tiny people since the species evolved imagination. When we invented myth, People of Unusual Sizes... 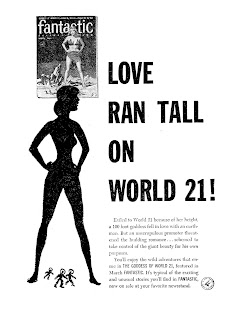